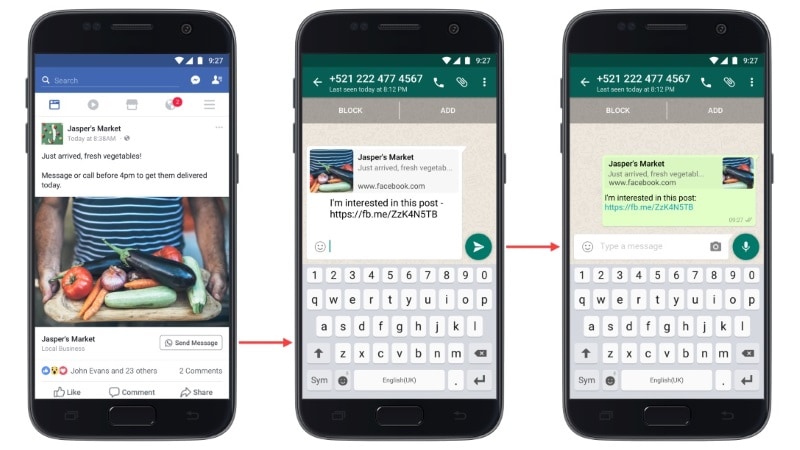 If you are an advertiser on Facebook, you now have a bigger audience to cater to as Facebook has launched a click-to-WhatsApp button on its platform that will let advertisers connect with over one billion WhatsApp users.

Facebook, which has 2.1 billion users, confirmed to TechCrunch on Thursday that it is rolling out the ‘Click-to-WhatsApp’ feature gradually, starting with North and South America, Africa, Australia and most of Asia. TechCrunch points out that Europe is missing from the list, a conspicuous absence that could be attributed to the hot water WhatsApp is already in with EU regulators over data sharing with Facebook.

“Many people already use WhatsApp to communicate with small businesses. It’s a fast, convenient way to stay in touch,” Pancham Gajjar, Product Marketing Manager, Facebook, was quoted as saying.

“By adding a click-to-WhatsApp button to Facebook ads, businesses can now make it even easier for people to learn about their products, set up an appointment or use their service,” he added.

Facebook said that over a million Pages currently include WhatsApp numbers in their posts.

To make the new feature work, reported Adweek, businesses that have WhatsApp numbers can add ‘send message’ buttons with the WhatsApp logo to their Facebook ads and those ads will only be delivered to users who have WhatsApp installed on their smartphones.

People must add businesses’ WhatsApp numbers to their contacts to initiate conversations.

Once they do it, the messaging app opens with a default message expressing interest, which can be edited by users before being sent.